Unknown [edit]
Wairobot appears as something of an antagonist or archrival to Kairobot. Similar to how Kairobot has a "K" on his chest, Wairobot is often portrayed with a "W" on his chest.

Wairobot is portrayed as an elderly robot with political ambitions. He is often seen engaging in shady activities. In many games he appears as the character in charge of the micro-currency shop (when there is one).

Wairobot appears in the downstairs of the 3rd studio. 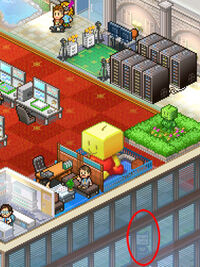 He appears as a catchable creature.

He also appears as a recurring boss that is himself in a large, mechanical version of himself. This boss first appears at Enigma Isle's secret base and then again at the end of each course on Coliseum Isle. On Coliseum Isle, he states that he has "upgraded" (by leveling up) his prototype more and more, each time guaranteeing himself that it is enough to defeat the player.

Wairobot is also a merchant who sells medals, the game's premium currency.

A Wairo Cake can be made with a Torte base. After creating a Wairo cake, Pumpkin will sell it once in the shop.

Wairobot appears as a Special Guest and, subsequently, as a customer of the elderly type. He is characterized as an escaped criminal.

The Wairobot appears partway through the game as the owner of a ticket shop. Items in his store costs real money. In addition to selling tickets, the game's premium currency, he also sells ad removal. Wairobot explains that he is selling tickets to fund his political ambitions.

Wairobot also appears as a pet.

Wairobot appears as a monster in High Sea Saga.

Wairobot appears as the owner of Palmgreaser Inc, a sponsor whose team is kicked out of the National League quite early in the game. The cost of recruiting him is quite low, but so are the rewards for accomplishing the task.

Wairobot is a special resident in Venture Towns who may move in if you have a large number of Politicians. His job is Politician. 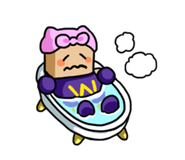 LINE Sticker
Add a photo to this gallery
Retrieved from "https://kairosoft.fandom.com/wiki/Wairobot?oldid=99827"
Community content is available under CC-BY-SA unless otherwise noted.