In Venture Towns, you build your own town from the ground up. You can create combos, unlock many different vehicles, buildings, houses, and jobs, and even get your residents pets. Your residents get money by going to work, and you get money from your residents spending their money at shops, residents paying rent, or by winning awards.

Residents are the main source of your income, as well as the income tax gained based on their house.

Jobs are used to help residents make more money, get a better house, and afford more stuff. There are many jobs, each with an unlock condition, and possible special benefits. However, if the resident fails switching jobs, one of their stats may go down.

Vehicles allow residents to move farther and access store they otherwise would have. Vehicles are either bought from stores, or won in contests by the Resident. A resident winning/buying a car is random, vehicles cannot be bought for a resident by the player.

Pets increase a specific stat of their owner.

Development Projects are important temporary events, that can result in long term stats boosts / monetary gain. These projects cost research points, often with a fairly balanced cost across all 4 types.

Items can be used to change the stats or other features of buildings / residents. They can be made using resource points, or found through harvesting Fruitful Trees. 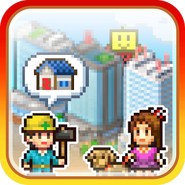 Japanese Banner
Add a photo to this gallery