The Ramen Sensei is a ramen shop simulation.

Build your ramen rep by fashioning the ultimate bowl from a vast assortment of noodles, soup, and toppings. From roast pork to miso, mackerel, and more--the only limit is your imagination, meaning you'll need to use your noodle to nail the right recipes and bring hungry customers in by the crowd!

Enter contests and see how you size up against rivals, thus cementing your standing as superlative sensei of the savory! Succeed--and one day you might even have your own ramen theme park! 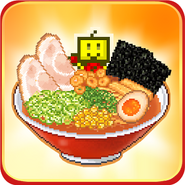