Kairosoft Wiki
Register
Don't have an account?
Sign In
Advertisement
in: Games with IAPs, Android games, IOS games,
and 4 more

Can be purchased via IAP.

In Station Manager you manage several train stations in multiple maps/towns. Develop the town and fill the station with shops and services to attract new passengers and open new train routes.

Only 1 train station can be managed at one time. However, about 40% income from the other stations will be added periodically to the current station. Every 1st month of the year, an option will be given to change the station that will be managed directly for the current year..

This game is similar to Kairosoft's previous game, Pocket Academy, where the game is played in several maps with different characteristics. Unlike Pocket Academy, all progress in all maps are saved, allowing player to change maps every game year without having to start a new game.

You may find these games mentioned in the game's newsletter "Off-The-Rails". 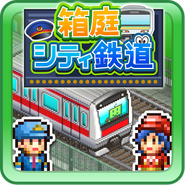