Pool Slide Story is a management game where players can create a fantastic and dazzling water park! They can achieve it by creating multiple popular pools, and improve cooking skill to create epic recipes for their restaurants.

The game used 4 seasons, Spring, Summer, Autumn and Winter to represents a year inside the game. Each season consists of 3 weekdays and 1 weekend (when peak customers arrive). Seasons not onlly affect the flow of customers aside from weather, but also can affect how Seasonal Popularity Bonus works on pool and attractions. 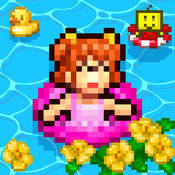