Pocket League Story is a game where you run a soccer/football team. You handpick the members of your team, train them to be their best, and fight your way to the best of every league! You eventually build a stadium for your team, and even sell merchandise for profits. As you get more popular, you will be able to unlock better sponsors, adding to your profits.

Your team is comprised of a coach and 11-30 players.

Coaches affect the experience points players get from practicing and the research points (RP) gained after a match. The better a coach's stats, the more RP.

Coaches are associated with formations, of which there are 33. You start the game with access to 8 formations and gain access to a new formation with each coach you sign on. Each formation arranges your players in a different way so as to grant greater, lesser, or equal emphasis between defense and offense.

Players are an important part of your team and should be receiving lots of training to bring out their full potential to become extraordinary. Even relatively low-potential players can attain relatively high stats of 300, and your starting team --when properly trained-- can easily pull you through to the Amateur rank.

Players can be put in a variety of positions (which have a specific A-F ranking)., and individual players may have special talents, which affect which stats raise the highest; for example, the Bodybuilder type has high Body, while the Speedster has high speed. The max level of a player is 30.

Players' salaries raise with their levels. However, the salary is paid per game played. Therefore, you can have an expensive player on your team and never pay them so long as you never use them in a game. This strategy allows you to hire a strong player and keep them for important matches.

There are 4 stats associated with your team: evaluation, fans, support, and fame.

These stats increase when you sign sponsors, perform fan activities, and win matches. Losing matches will usually decrease your stats.

The rank of your team is based on its evaluation, which rises as you win matches. Reaching new ranks unlocks new Facility types and Training methods; you also gain the ability to upgrade facilities at your first rank up.

There are both offensive and defensive formations.

Between matches, your players may use facilities that you have placed around your field. When they do so, you earn a small amount of money as well as Research Points (RP). RP can be used for training players, bargaining with sponsors, or arranging fan activities.

Periodically throughout the game, you have the chance to upgrade your stadium in three ways. The game also classifies these upgrades as "facilities", although they function quite differently from the training facilities.

Each player has an aura gauge which, when filled, can be activated in a match for a temporary boost to their abilities. The aura gauge fills in one of two ways. One way to fill the gauge is through the use of facilities like the Gift Shop or Gym. Each of these facilities has a ranking (low, normal, or high) which tells you how quickly it fills a player's gauge when in use. A player's aura gauge is also filled a little when they are knocked down in match play. Note that your players will only get knocked down if their Body stat is low.

A player with an active aura looks like they have a flame around their body. They move faster, kick further, pass more accurately, and are more resistant to tackling. Auras can only be activated in the player nearest the ball, and they deactivate when (1) halftime occurs, (2) any goal is scored, or (3) the match ends.

Sponsors pay you money each time you play a match. Additionally, when you sign with a new sponsor, you get a one-time bonus, such as an introduction to another sponsor or the ability to hire a new player.

You must convince businesses to sponsor you. It costs

Once you reach a certain point in the game, you unlock the ability to spend your

RP on fan activities. As you spend RP, each activity gains ranks (from F to S as shown below). It costs more money to run an activity at a higher rank, but you also unlock access to new items (sponsors, players, etc.) at each rank up. 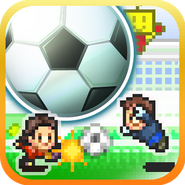 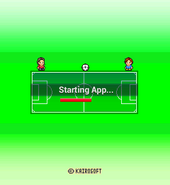 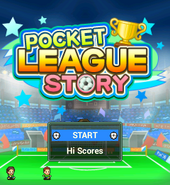 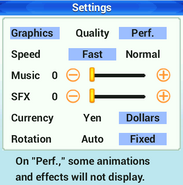