This game is separate from Pocket Academy ZERO; please visit that page for correct info. 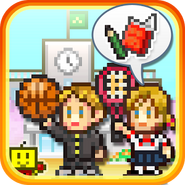