Oh! Edo Towns is a simulation set in the Edo Period of Japan, where you are in charge of a small village, and work your way up to being one of the best towns / cities in all of Japan.

Combos are an important factor in placing your structures, as they can greatly boost the yield / price of not only those structures, but those in the surrounding area.

Combos stack, and the same structure can be used to form multiple different combos. There are a total of 46 combos.

Residents are the core of your town's economy, and instrumental in its growth. Residents have 4 attributes:

Even after conditions for a vehicle has been met, it can take years for a resident to purchase one, with each upgrade often taking longer and longer to purchase.

Crafts can be used on residents or structures to increase their yield, price, both, or neither.

There are many travelers who will chose to visit your town. They will visit stores / meet with residents in parks, and after enough trips, they will finally be satisfied, and reward you. Travelers will still visit after their satisfaction has been maxed. 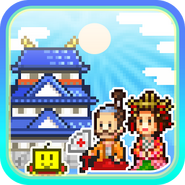