Andre Cant, Estrada E, Hulk Grogan, King of Tenochtitlan, Mr. X, Wrestler, Event Master, Res Surar
Mister X's defining characteristic is his brightly colored luchador's mask. This mask is a sky blue, with hot pink marks around his eyes, and a yellow line running down the middle and an opening over his mouth.

Unlike other special characters who often have a very similar design across games, other than his mask Mister X rarely has the same appearance. Even his name widely varies between games. It is common for his character to show an interest in wrestling, video games, or both, or to exhibit skills reflective of these interests.He is not an alien. 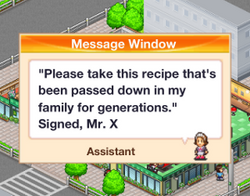 "Mr. X" is a tertiary character who leaves behind signed recipes after events. There is also a masked reviewer who you can invite to your restaurant.

Mr. X's iconic mask is obtainable as a piece of clothing.

Mister X is one of the first special characters to appear to the player and offer his services as an employee. A news article talks of A " Mister X " sabotaging a Game Studio.

Appears as the "Killer" job in High Sea Saga.

Appears as customer No. 64. His name is a pun of Hulk Hogan.

Appears as Andre Cant, a teacher with potentially max stats.

Appears as billy jean a farmer with high stamina.

Can be contracted as a bodybuilder type player named Estrada E.

Aliases: King of Tenochtitlan
Quote: "I would love to take a cruise with you sometime. Farewell."

King of the country of Tenochtitlan.

A group of wrestlers will appear after you win the World Series. Defeating them will have one of the wrestlers join your school.