The game is divided into several countries. Each country has different islands to explore. Unlocking countries is done by increasing population. Changing countries can be done by talking to the king at the Base Island.
This is the list of countries and the population needed to unlock them :

Armonica
Add a photo to this gallery

This section is a stub. Please help expand it.
Each island has a strength level, providing a general guide to the difficulty of monsters that spawn during quests and on the deck while at that island (monsters spawned during unlocked "major" quests will be much higher than the listed strength level). Aside from that, each island also has a monster frequency rate which indicates how often monsters will appear on the deck. Docking at an island with a high spawn rate means the crew will fight more often, decreasing facility usage but increasing loot. Fleet Rank indicates the fleet rank that's needed to clear all quest on the Island. Additionally, each island has an activity gauge, which depletes as resources are gathered, monsters are fought on deck, and residents of buildings shop on the ship, and refills when not docked at that island. When the activity gauge is empty, monster spawn and resident activity are greatly reduced. Finally, an island that has shops built will have associated shop meters. Allowing residents of the shops to visit your ship will fill these meters; completing a meter resets the meter and awards items.

Every island has a questing spot, where stamina is spent to send combat groups on quests. Some islands start partially obscured and will be revealed once a certain quest (usually a boss quest) is completed. Completing all quests on an island will grant a reward from the King, consisting of a Medal of Conquest relic, medals, a monster flute, and additional items. Completing quests may also unlock additional unexplored regions.

Aside from a questing spot, islands may have some pre-built buildings and vacant lots. Vacant lots may be used to build new buildings, increasing population, facility effect, or shop stock.

Monsters column lists the monsters that appear on the island either on the deck or at questing areas, which can be useful when attempting to clear Monster Hunt Campaigns. * indicates the monster can be found on deck battle. Codes in parentheses, such as (D+++), indicate repeatable quests that spawn that monster. Bold text denotes rare monsters.

On each Island, there are usually several repeatable Quests. These quests have a higher stamina consumption than normal quests, however it's redoable as long players have enough stamina. From these quests, players can get items, equipments, ship structures, and capture some NPCs to be recruited later.

On difficulties higher than Normal? (Nightmare Confirmed), Super version of monsters can appear during a quest. They usually appears at the boss group on a quest. They can be distinguished a bigger image than their normal counterpart. Aside from the big appearance, they also have super stats with HP estimated at 8x-10x the normal version has, and other stats estimated at 150% of their normal counterpart.

Their appearance can usually be predicted by the appearance of red warning text during the quest selection screen. Due to their very dangerous nature, avoiding them should be top priority especially for players who are not prepared. 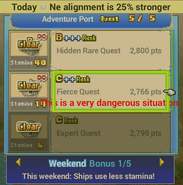 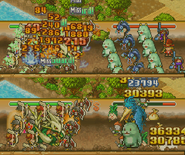 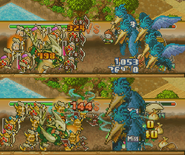 Super Sassa appearance comparison
Add a photo to this gallery
Retrieved from "https://kairosoft.fandom.com/wiki/Islands_(High_Sea_Saga)?oldid=99458"
Community content is available under CC-BY-SA unless otherwise noted.