Dungeon Village 2 is an RPG town management sim and the sequel to Dungeon Village where you build a town, expand to new areas, and help adventures grow and prosper as they fight stronger monsters and team up to defeat bosses.

Similar to Dungeon Village, adventurers will go out on their own to fight. After battling for a while, adventurers will return to your town to purchase supplies and equipment and relax to regain their stamina. The longer they fight, the more they will level up and improve their stats. Different Jobs will give different boosts to the skills they have. If an adventurer fights for too long and gets knocked unconscious, another adventurer will have to save them or you can use an item to revive them.

On top of watching your adventurers clear mobs by themselves, you can ask them to sign up to fight large gatherings of monsters and explore dungeons to gain EXP and items for further improvement to adventurers, buildings, or use within the cauldron. Completing these dungeons will raise your town's popularity, bringing more and more adventurers to your outpost. Dungeons also grant you more town points which can be used to purchase more buildings after leveling up your outpost.

After completing certain tasks, the Adventurer's Guild will give you medals to hand out to your adventurers. These medals will increase the adventurers willingness to claim a house and fight enemies on their own.

When you defeat the final boss in each area, you gain access to the next. There are seven in total:

Each adventurer has their own levels for jobs and stat modifiers. You can equip each adventurer with items and give them consumables. These will help raise some of their stats. Adventurers will move into your outpost upon reaching a certain satisfaction level. After which, they will become more satisfied and be more willing to fight enemies. They will also give you a special item or building upon moving in.

Like the first game, there is a wide variety of jobs an adventurer can take, including new ones. Leveling up a job to level 10 gives certain boosts for certain jobs ranging from simple stat buffs to a single skill to powerful spells that can be used in battle; you will also be prompted to either choose a new profession or keep their current one. Unlike in the first game, it is possible to level up jobs beyond level 10; however, the required XP rises sharply after level 10. Some local adventurers (like the Kobold) have unique jobs and cannot change jobs.

Equipment is divided into 4 categories:

You may also give non-equipment items as presents which can raise some stats.

Building facilities is the main way to attract more adventurers and visitors to your outpost. These are divided into 3 categories:

Each structure has a certain upkeep amount. You can build structures more than once in your town to allow extra adventurers to use facilities at the same time (for example, the inn can only hold 4 adventurers at once).

Items are used to enhance adventurers and facilities.

The cauldron is a way to spend items, converting them into 4 essences (fire, lightning, ice, and dark). These essences can be spent to upgrade weapons and to unlock new buildings and equipment. Spending more items in the cauldron gains you knowledge points which automatically unlock different avenues to spend your essence on. At the beginning it is only possible to spend 10 items at once, however after completing the Expand Cauldron 1 and Expand Cauldron 2 events, the cauldron's size can be increased to 20 and 30 respectively.

As time passes and new adventurers join you, new quests will open up for completion. Each quest will have a fee to start the quest as well as a secondary fee to recruit adventurers who did not initially sign up to join the quest. In the game there are three types of quests: Dungeons, Mob Groups, and Bosses.

Title can be acquired from contests or getting certain trait at highest point during town evaluation (March, 4th Week) every year. Diamond Points and Population are rewarded for unlocking new titles. 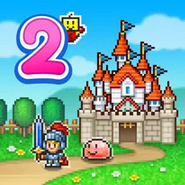