Chimpan Z (pun on Chimpanzee) is a reoccurring playable character in many of Kairosoft's games.

Chimpan Z is an unlockable "Staff".

Quote: "I'm Chimpan Z; a chimp with an IQ of 108. I have a particular knack for engineering and robotics."

Chimpan Z (also known as Young Chimpan and Dr. Chimpan) is first found on the docks of your island. He appears to have been knocked out and possibly suffering from amnesia. He is thankful that he has been rescued and moves to live on your island where he can perform research in his lab. He requires lumber to perform his research; the more a player invests in the research, the faster it will be completed.

Chimpan also believes he was the creator of Mecha Chimp but states he has no recollection of ever building it.

Animal Trainer is an unlockable "Job" type; when worn, the user looks like Chimpan Z.

While Chimpan Z does not make an appearance himself in this game, there is an armour in his likeness called the Chimpan Z suit. The suit instantly captures 1 defeated enemy that has not yet been captured every battle. It shares this ability with the Kairosuit.

He appears as an employee. He's the only employee who is a Hardware Engineer by default.

Chimpan Z appears as a mechanic for hire.

Appears in High Sea Saga as the Monkey job.

He is a special guest that can be unlocked.

He appears as a civilian on each planet.

It is also mentioned he was kidnapped by Wairobot and forced to build the Mecha Chimps found in this game and also in Beastie Bay.

Chimpan Z can be hired as a Lvl. 3 Paparazzo using the College recruitment.

Quote: "Until recently, I had been living at a nearby hot springs inn, eating bananas, but they kicked me out... I managed to make it all the way here, when by chance I found that I had won the lottery! So I've decided to stay here for the moment and enjoy some shopping. I'll see you around!"

Appears as customer No. 84.

Appears as a villager. 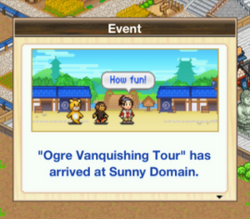 Chimpan Z is a member of the "Ogre Vanquishing Tour", along with Grizzly Bearington.

Chimpan Z is a teacher that can be hired to teach at your school.

Chimpan Z is a potential customer.

He's a player who can be signed to your team.

He's customer from Chimpan Forest, as well as a staff member

Chimpan Z is a sponsor of the last contest in the game. He invites you to participate in it after you receive a 5 star store rating.

Chimpan Z is a potential passenger. He is an inhabitant of Kairoland.

Chimpan B is also a potential passenger hailing from Kairoland. Chimpan B looks identical to Chimpan Z except for a red bow. 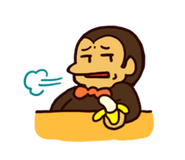 Chimpan B, female counterpart of Chimpan Z (World Cruise Story)
Add a photo to this gallery

Retrieved from "https://kairosoft.fandom.com/wiki/Chimpan_Z?oldid=63130"
Community content is available under CC-BY-SA unless otherwise noted.